Home » Nuggets » Calling All You Dreamers – Part 3 – Should Your Dream Live or Die?

Calling All You Dreamers – Part 3 – Should Your Dream Live or Die?

This is the last post in the 3 part series “Calling All You Dreamers.” You can view the last 2 posts here:

Calling All You Dreamers – Part 1

Should your dream Live or Die is the question I want to cover today. The thing about dreams is everyone has them, some put action to them and many never see the light of day. The question I think we each need to ask ourselves is if our dream should live or die?

Take the church for instance. Let’s imagine you have a dream of how you think it should look. Perhaps you think the institution should be less “institutionany” and more of an interactive community. I for one would be all on board for this.

Does this dream need to live or die?

I would imagine most of you reading this are shouting in your head, “Absolutely it needs to live.” But, for it to survive… For it to actually become more than a dream, it requires the dreamer to believe enough in it to do something about it. That perhaps might even mean traveling the road of giving it life, alone.

Having a dream doesn’t guarantee others are going to jump on board with you. Even if it is right. If you have a dream it is your responsibility to nurture it to life, if it needs to live.

Some dreams just need to die however…

I used to think I could see the church so clearly. It had a lot of good attributes but many bad ones that seemed to cover up any good that was there. It felt fake and plastic… routine with a monotonous repetition.

My dream was for there to be interaction and for it to look alive. For people to stop fighting over such silly things and to focus again of loving God through service to the broken. I believe my dream was right, but my dream became an idol that eventually led to me leaving the church.

My dream wasn’t bad. In fact, I believe it was genuine and heart-felt. It’s a dream I still have to this day, I just look at it differently than I did before. I believe it came out of a place of longing for deeper interaction and community with God and the church. Where it became an idol however, is in how I handled that dream.

I started to believe everything needed to change for this to come true. I would go through the scenarios in my head of how this would need to happen. The awkward conversations that would ensue played out in my mind. I spent hours and hours going over the ways people close to me had been hurt by the church, and their hurt slowly became my own hurt.

After enough time of “dreaming” of the change I became bitter. Bitter from dream atrophy. Bitter from looking at my dream as the answer instead of my Father as already having solved the problem. My dream needed to die because it started to rely on other people changing for my own sake, instead of me becoming the change I wished to see regardless of what others did.

My dream no longer was my own but became a fantasy not based in action or reality but in the hope that other people would change in order for it to come true. My dream needed to die because of the way I handled it. Instead of it being a mental image of hope it became a spear piercing my own heart.

Sometimes we need to be willing to let our dream die in order for it to be brought to life later when we are ready to handle it.

I still have the same dream for the church. Though, I now see it much differently than I did before. Instead of getting angry and disappointed at how little other people fit the mold my dream made, I now only look at this dream in the face of a mirror. What can I do to become more loving, gracious and interactive in the community of the church? What can I do to become more like Christ?

And, for the things I can not do or change myself… Well, I don’t get all worked up about it. Sometimes there are just things we can’t change at the time and that’s ok. It helps me to remember that God has given us everything we need to accomplish the task given to us at the time it is given and in that we lack nothing.Sometimes a dream needs to die so another can rise up to take it’s place.

Sometimes a dream needs to die so another can rise up to take it’s place. The point is not that you need to quite dreaming. Actually, it’s the opposite. Dream more, dream until you can’t dream any longer but be willing to act on those dreams.

Be willing to take a step and if the dream fails then be willing to get back up. Be willing that if your dream is causing your heart to become bitter to let it die so another can rise up in its place. Bitterness is unnecessary weight which kills action that fulfills dreams.

Dream and Do my friends. Coronavirus: It's ok to feel afraid. Sabbath… An often misunderstood word. In a large part, it’s about rest but I’m sure for many of us, our… 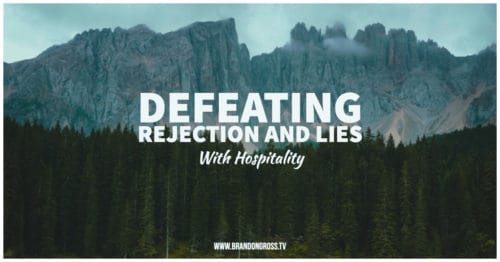 Defeating Rejection and Lies With Hospitality

Have you ever felt like an outsider or rejected? I have. Let me share a story from my childhood that…